Following a number of high-profile, in-custody police killings of unarmed black men in 2014 and 2015, police departments began searching for a way to enhance accountability and transparency. Many agencies began deploying police body-worn cameras (BWCs) to achieve those goals. Proponents of the technology argue that it can lower police use of force and citizen complaints, encourage transparency and accountability, de-escalate situations through a “civilizing effect” for both officers and citizens, and aid in review of critical incidents.

In 2015, however, there were only a handful of studies examining police BWCs. To address this research gap, the Laura and John Arnold Foundation (http://www.ljaf.org) funded several rigorous research projects dedicated to assessing the impact and consequences of police BWCs.

Dr. Michael White of the CVPCS and his research team conducted a two year randomized-controlled trial of BWCs in Spokane, Washington, and Tempe, Arizona. In both departments, leadership had already decided to implement BWCs and agreed to allow the research team to randomize the deployment of those cameras. Each department’s patrol division was randomly assigned to receive their cameras either in Phase 1 (Spokane: May 2015; Tempe: November 2015) or six months later in Phase 2 (Spokane: November 2015; Tempe: May 2016). The research team then tested the impact of BWCs on a number of outcomes. 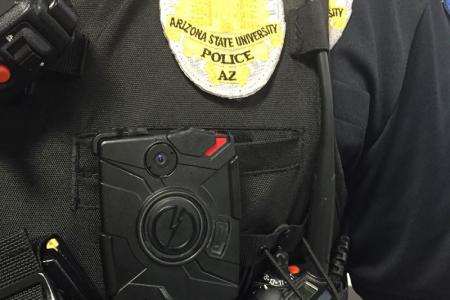 Dr. White and his team have published numerous papers based on the project, and have presented results at national meetings, both academic and practitioner. Below are a few selected citations for their work.

Officer perceptions of police body-worn cameras before and after deployment: A study of three departments. Police Quarterly, 19 (3), 275-302.